Vegetarianism for a sustainable choice

Compared with meat eaters, vegetarians tend to consume less saturated fat and cholesterol and more vitamins C and E, dietary fiber, folic acid, potassium, magnesium, and phytochemicals (plant chemicals), such as carotenoids and flavonoids. As a result, they're likely to have lower total and LDL (bad) cholesterol, lower blood pressure, and lower body mass index (BMI), all of which are associated with longevity and a reduced risk for many chronic diseases. (sources: Harvard Women Health Watch)

--ALL-- Foods/Cuisine Health Religion
 BACK
10 ways vegetarianism can help save the planet
The average British carnivore eats more than 11,000 animals in their lifetime, each requiring vast amounts of land, fuel and water to reach the plate. It's time to think of waste as well as taste. 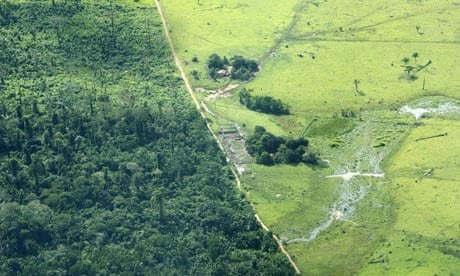 If we really want to reduce the human impact on the environment, the simplest and cheapest thing anyone can do is to eat less meat. Behind most of the joints of beef or chicken on our plates is a phenomenally wasteful, land- and energy-hungry system of farming that devastates forests, pollutes oceans, rivers, seas and air, depends on oil and coal, and is significantly responsible for climate change. The way we breed animals is now recognised by the UN, scientists, economists and politicians as giving rise to many interlinked human and ecological problems, but with 1 billion people already not having enough to eat and 3 billion more mouths to feed within 50 years, the urgency to rethink our relationship with animals is extreme.

We humans eat about 230m tonnes of animals a year, twice as much as we did 30 years ago. We mostly breed four species – chickens, cows, sheep and pigs – all of which need vast amounts of food and water, emit methane and other greenhouse gases and produce mountains of physical waste.

But how much stress does our meat-eating put on ecological systems? The answer is a lot but the figures are imprecise and disputed. In 2006, the UN calculated that the combined climate change emissions of animals bred for their meat were about 18% of the global total – more than cars, planes and all other forms of transport put together.

The authors of the report, called Livestock's Long Shadow, did not just count the methane from the belching, farting cattle, but the gases released from the manures that they produce, the oil burned taking their carcasses to markets often thousands of miles away, the electricity needed to keep the meat cool, the gas used to cook it, the energy needed to plough and harvest the fields that grow the crops that the animals eat, even pumping the water that the cattle need.

The figure was revised upward in 2009 by two World Bank scientists to more than 51%, but attempts to fully account for meat-eating are condemned as simplistic. Should the studies have been based on giant US factory farms, or on more sustainable breeding in Europe? Should you include all the knock-on emissions from clearing forests? What about the fertiliser used to grow the crops to feed to the animals, or the emissions from the steel needed to build the boats that transport the cattle; or the "default" emissions – the greenhouse gases that would be released by substitute activities to grow food if we were to give up meat? And is it fair to count animals used for multiple purposes, as they mostly are in developing countries, from providing draught power to shoe leather or transport, and which only become meat once they reach the end of their economic lives?

It's an accounting nightmare but depending on how it's done, livestock's contribution to climate change can be calculated as low as 5-10% of global emissions or as high as 50%. Last year, a Food Climate Research Network report concluded that UK meat and dairy consumption was responsible for 8% of the country's total greenhouse gas emissions. But however it's counted, livestock farming ranks as one of the three greatest sources of climate changing emissions and one of the largest contributors to environmental degradation.

“Humanity’s true moral test, its fundamental test…consists of its attitude towards those who are at its mercy: animals. And in this respect humankind has suffered a fundamental debacle, a debacle so fundamental that all others stem from it. ~Milan Kundera Author, The Unbearable Lightness of Being.”

Vegetarianism for a sustainable choice

“Humanity’s true moral test, its fundamental test…consists of its attitude towards those who are at its mercy: animals. And in this respect humankind has suffered a fundamental debacle, a debacle so fundamental that all others stem from it. ~Milan Kundera Author, The Unbearable Lightness of Being.”
© Copyright 2001- 2018 Vegetarian Society Mauritius                          Designed and maintained: Red Apple Designs